How we’ve become a trusted feed mill for Ontario farmers 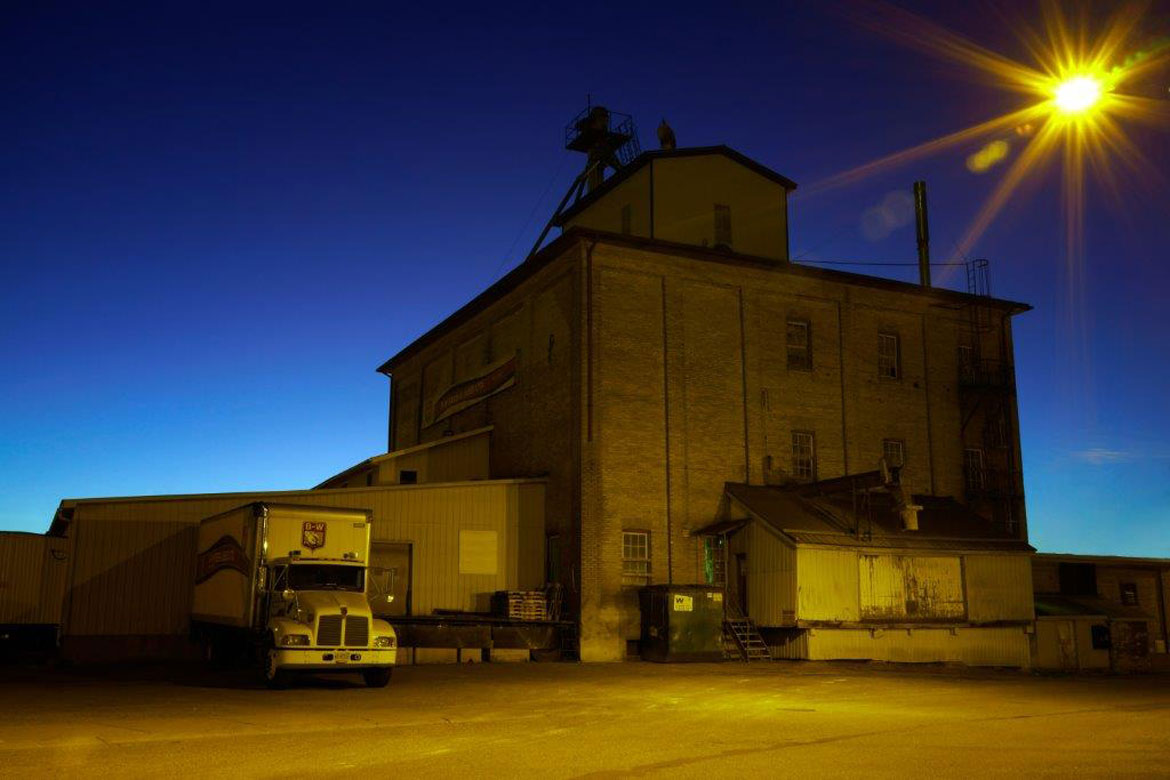 The early history of milling in New Hamburg is so closely linked with the history of the community that they can be separated only with difficulty. As it was, the very existence of New Hamburg came about as a result of a milling enterprise.

What is now New Hamburg was situated on the Nith River at the western end of “German Block” in Wilmot Township. This was the central portion of the township which was committed by Governor Maitland to the followers of Christian Nafziger in the year 1822. Nafziger was the leader of a group of mid-Europeans known as the Amish, a religious denomination whose members came here to seek escape from persecution because of their beliefs.

The land in the immediate area, perhaps was not choice farm land because of the twisting Nith River. Being rather low-lying it was subject at times to some flooding. In the New Hamburg area the river dropped somewhat in elevation and so it was capable of providing water power if a dam could be built.

Settlement in Wilmot was in its’ first decade. In 1833 Josiah Cushman arrived on the scene and received a grant of land, including the right to build a dam on the river to use its power. Among the needs of early settlers were the milling of grain and sawing of timbers. These services were to be provided by Cushman for the construction of his dam and mill. An early map indicates these facilities as being located at the north end of the present dam and behind the business building located on Huron Street. Unfortunately, Cushman’s tenure here was brief and tragic.

In the early summer of 1834 a cholera epidemic swept through the district bringing a swift death to many dozens of people, including Cushman, his wife and children. By early 1837 the property was sold to the mortgage holder, Absalom Shade, an influential Galt businessman with substantial holdings and political interests. Shade in turn sold his New Hamburg mill and the water rights to William Scott in December of 1845. Within a few more years, Scott undertook to build a new mill. To power his operation, a mill race nearly a third of a mile in length was built to lead water from the dam northward through the new mill and downstream to the river which formed a loop around what was to become the present business area.

According to census records, the mill was a substantial operation and within a few years was sold to Messrs. Thompson and Wilson who carried on, apparently with some difficulty, as William Scott reacquired the operation for a time.
The Ground Trunk Railway was constructed through New Hamburg and open to service in 1856. The community’s economic prospects brightened with this new mode of transportation and Scott’s holdings were sold to the firm of Parker and Wilson in early 1864. By about this time, Mr. Scott and his family had left to reside in New Zealand. After about ten years, Parker and Wilson sold the mill to Samuel Merner and John Wilson. The former, a pioneer resident of the area since about 1837, was a prominent businessman. He was elected to Parliament in 1878 and later was elevated to the Senate. Merner bought out his partner’s interest in 1879, leased it briefly and then sold it to his brother, Fred Merner.

A softer economy at this time may have been responsible for the succession of owners, but Fred Merner carried on until leasing the operation to Joseph Laird and James Hamilton in 1888. A spectacular boiler explosion severely damaged the three-story frame building in September of 1889. The local newspaper reported in detail on the explosion, in spite of itself having been badly damaged in a a fire at about the same time.

Fred Merner rebuilt the mill, then sold it to his brother Christian Merner who ran it briefly. Once again, for some years a succession of people owned and operated the mill. Jacob Morley installed a generator and sold hydro-electric power to some businesses and for some street lighting by arc-lamps. Morley was in possession from 1893-1897, Jacob Zurbigg for a year, and I.M. Clemens until August 8, 1902 when the frame building was completely destroyed by a spectacular fire.
Following the fire, no milling activity took place and the property was not utilized for two years until early in 1904. Stuart Brothers of Mitchell acquired the property and built the present three storey brick structure which remains to this day. Four years later the company was incorporated as Stuart Brothers Ltd. and carried on until selling out to New Hamburg Flour Mills Ltd. early in 1922. This new company was headed by J.G. Wolverton, Mr. and Mrs. A.H. Otto and Mr. and Mrs. E.D. Luckhardt. Successively the owners were Abraham Otto and Charles Eidt until 1936, then the Hanover firm of Wm. Knechtel and Son until 1962 when it became New Hamburg Mills Ltd. Its’ successor was Great Star Flour Mills of St. Marys which closed out flour milling and was succeeded in 1972 by Earl Bender and Cecil Wagler. They had operated a feed store under the name B-W Feed and Seed Ltd. at the former Debus Feed Store at 88 Huron Street since 1966. For some time during the 1940’s and early 1950’s, the mill was operating on a 24-hour basis, and due to hydro shortages, the mill wheels were occasionally pressed into service to power the machinery. When flour production ceased in the 1950’s, the water power was no longer used, and though the mill race was filled in at that time, the horizontal water turbines still remain intact beneath the building. One event of interest occurred in June of 1944, when the brick wall on the south side collapsed due to pressure of the grain which had leaked from an inside storage bin and settled between the bin and the brick. The damage was repaired, and the mill continued. A few years later a small fire occurred, but damage was negligible.

The opportunity to buy New Hamburg Mills from Great Star Flour Mills in 1972 seemed to be the right time for Earl Bender and Cecil Wagler to expand and diversify. Their business had outgrown the small Huron Street buildings, and the farmers were requesting bulk feed delivery. This necessitated the move to the larger feed mill facility, in order to continue the quality of service desired. B-W’s relocation to the mill facility in 1972, allowed B-W to take on the Shur Gain Franchise, produce bulk feeds and offer a broader service of grinding and mixing feeds. It also allowed them to expand the line of products which included fencing supplies, farm seeds, hardware, animal health products and lawn and garden seeds. There was virtually anything a farmer might need.

In 1976, the Shell Canada dealership of bulk fuels, was purchased from Ken Massel and operated alongside the feed business. For six years B-W was the local Shell distributor, but many changes and challenging times prompted the sale of this business back to Shell Canada.

The customer base and selling area broadened and a feed store and warehouse in the village of Bright was operated in 1987 to serve customers better in that area. In 1990 growth and changes prompted the move of the lawn and garden seeds, along with pet foods and pet supplies, to the building at 88 Huron Street, which up until then had been leased to a variety of other businesses. Thus the opening of Heritage Pet and Garden Counter allowed for further expansion of pet food lines as well as lawn and garden supplies. A year later, 1991, the E.G. Budd & Son store in Stratford, was purchased to serve customers in that area with similar products as Heritage Pet & Garden.

In 1994, B-W entered into a joint venture with another established feed mill, to purchase the former Hybrid Turkey feed mill, near the town of Elmira. This mill, renamed as BWS Feeds was another asset to the already established and growing business, allowing the addition of producing pelleted feeds.

B-W Feed and Seed Ltd. has aimed to be a responsible corporate citizen over the years by supporting local 4-H clubs, Agricultural Fall Fairs, Minor sports and many other community events.

B-W Feed and Seed has seen significant growth over the years, all of it due to loyal customer base and the dedication and commitment of the employees. Change prompted the sale of E.G. Budd & Son store in 2000, and more recently in 2005 the interests in the BWS facility were also sold. The Bright store, in operation for 18 years closed in October 2005 because of the decline in livestock numbers in that area. Customers continued to be serviced from the New Hamburg location.

Earl & Ferne Bender and Cecil & Reta Wagler retired in recent years and passed on the management of B-W Feed and Seed to their sons, Dave Bender and Evan Wagler.

In 2010, B-W invested $3,000,000 in equipment and technology to improve manufacturing capability and capacity. With this investment, B-W now has an automated ‘production’ facility, ensuring consistent quality feed products.

Since 2012, Dave and Cindy Bender have been the sole owners of B-W Feed & Seed Ltd. They continue to strive to treat all people respectfully, be a low cost producer for livestock and poultry feeds, and earn the loyalty of their customers by providing product value and service.

Do you want to be apart of our history?

Yes! I want a lasting relationship with a trusted feed mill.

We look forward to many more years of serving Ontario farmers.